How Queen Victoria and Prince Albert used the symbolism of flowers to express their love for each other and their families is one the many themes explored in a new art exhibition on display at The Queen’s Gallery in Edinburgh – Painting Paradise: The Art of the Garden.

The gift of flowers to send a message to the recipient became highly fashionable in Victorian society, and the practice was fully embraced by the royal family.

On her 14th birthday the future Queen Victoria recorded in her Journal that she received ‘from Mamma a lovely hyacinth brooch and a china pen tray’. The Minton tray decorated with Victoria’s coronet surrounded by a wreath of pansies, symbolising ‘loving thoughts’, will be shown in the exhibition.

Reporting on the marriage of Queen Victoria and Prince Albert on 10 February 1840, The Times newspaper wrote that ‘Her Majesty wore no diamonds on her head, nothing but a simple wreath of orange blossom’. The Queen’s simple floral adornment, an emblem of chastity, and white silk wedding dress became the standard attire for Victorian brides and spawned a fashion for orange blossom jewellery. 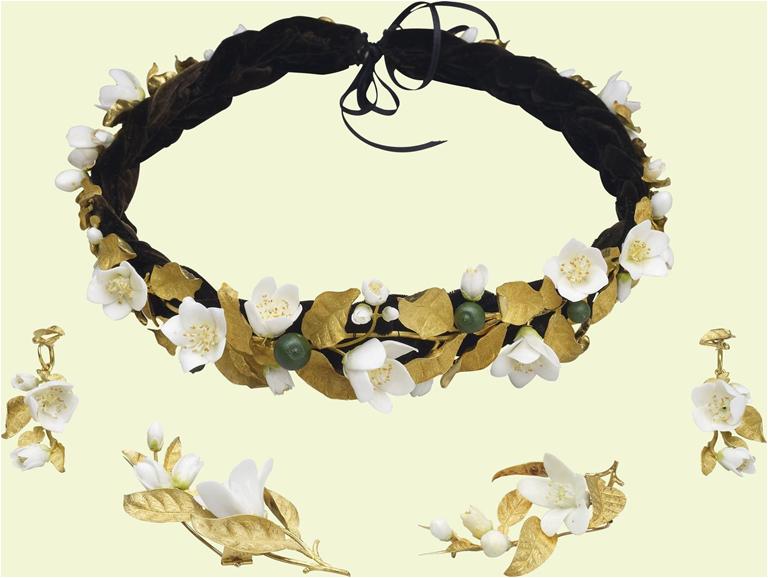 Between 1839 and 1846, Prince Albert presented Queen Victoria with a number of pieces from a beautiful orange blossom parure (matching set of jewellery) to mark significant moments in their lives. One of the first gifts he sent Victoria was a brooch in the form of a sprig of orange blossom to celebrate their impending betrothal in 1839, accompanied by the message ‘May you think with love of your faithful Albert when you take it into your hand.’

In 1845 Albert gave Victoria another orange blossom brooch and matching earrings, and the following year his gift of an orange blossom wreath celebrated their wedding anniversary. The wreath incorporates four budding orange fruits, thought to symbolise the four children the couple had at this point. Queen Victoria continued to wear pieces from the parure on her wedding anniversary throughout her married life.

The complete set of Queen Victoria’s orange blossom jewellery will be on display for the first time in Scotland at this new exhibition.

Painting Paradise: The Art of the Garden explores 400 years of horticultural art in the Royal Collection, from spectacular paintings of epic royal landscapes to jewel-like manuscripts and delicate botanical studies. The exhibition brings together over 75 paintings, drawings, books, manuscripts and decorative arts from the 16th to the early 20th century, including works by Leonardo da Vinci, Rembrandt van Rijn and Thomas Gainsborough.